We are grateful to Mr David Paterson for this brief history of the Centre.  You can read the full story in his book “A Good Eddication” which is available from the Centre and by post.

There was schooling in Chilvers Coton in the 17th Century without the aid of a school building because of the educational concerns of the Newdigate family of Arbury Hall.  In an age when this was much less common, Sir Richard Newdigate (1644-1710) was particularly keen on children attending school. In his time John Holmes was recorded as Coton Schoolmaster in 1684 and Jane Hutt a school ‘dame’ in 1692. From 1697, probably until 1733, local vicar John Viall was the licensed schoolmaster.

Some years after Sir Richard’s death his daughter-in-law Lady Elizabeth Newdigate was temporarily head of the family after the death of her husband. She decided, in 1735, to put schooling in Coton on a more formal basis and arranged for the construction of a charity school, one of many erected over the country in the early 18th Century. It was ‘to teach 30 poor children of the parish’, boys in Reading, Writing and Arithmetic, and girls in Reading, Writing, Knitting, Spinning and Sewing. The school was a free one for the poor of the parish and Lady Elizabeth bore the expenses, which included uniforms. The school, which cost just over £73 to build, was constructed opposite the parish church, the part of the building now closest to Coton Arches.
After about 1760 with Lady Elizabeth Newdigate in failing health, her son Roger increasingly assumed responsibility for the school and eventually constructed a new set of buildings adjacent to the earlier ones.  The school building plans of Henry Couchman, who also designed the saloon at Arbury Hall in the Gothic style, were ambitious. His plan for a four-columned entrance was not completely followed through. Nevertheless, the frontage with a large semi-circular window showed off ‘Handsome stone buildings’, two storey’s high. There were high ceilings and tall windows. 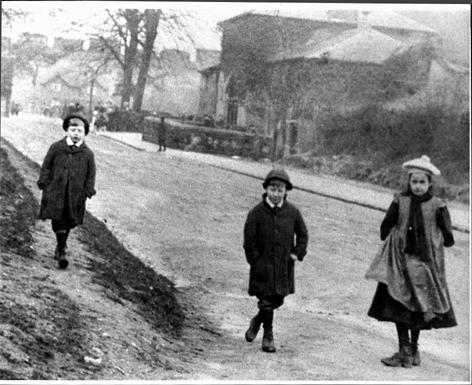 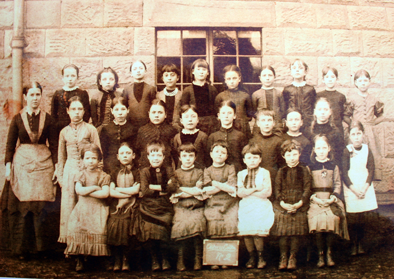 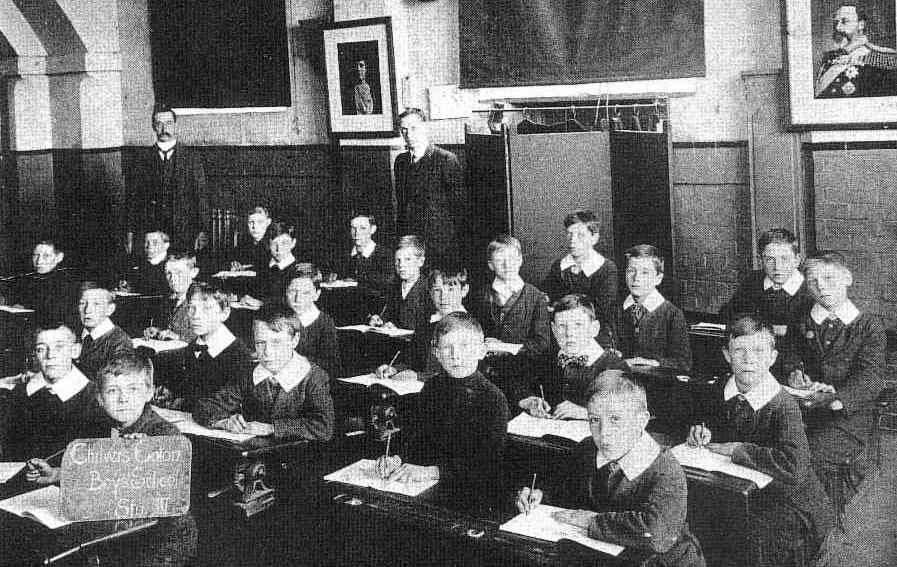 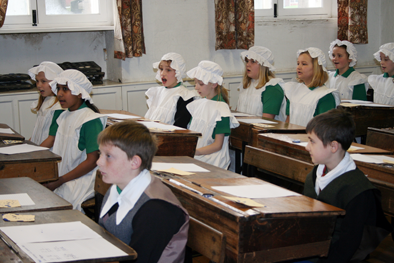 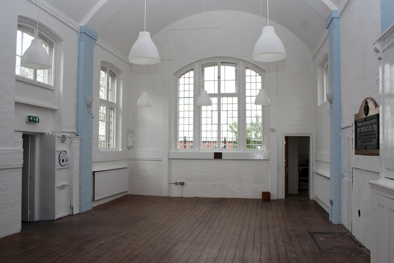 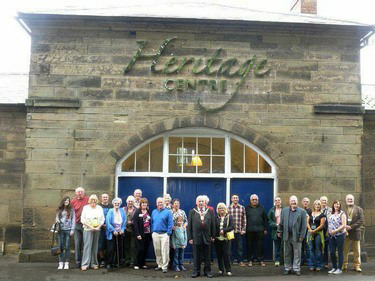 The early to mid nineteenth century saw the growth of schooling over the whole country. In Coton from the late 1830’s onwards Charles Newdegate continued to fund the school: by now, many others charged a small fee. In 1844 with the death of the old Schoolmistress, Ann Morris, and with boys’ numbers now exceeding girls’, the new Coton vicar, Henry Hake, requested that Charles Newdegate organise the construction of a larger boys’ schoolroom  in the central part of the building. The recent stripping of the roof timbers from the 1840s revealed the carving of Charles Newdegate’s initials. 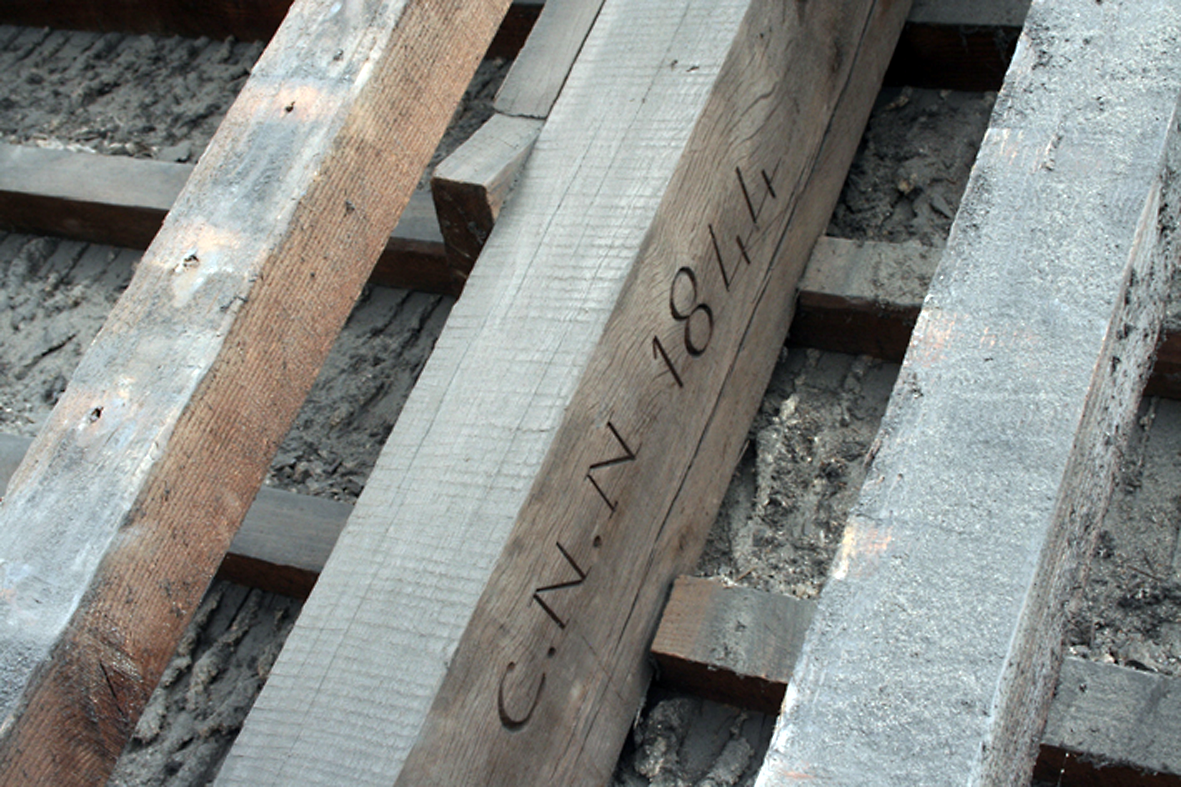 But soon after this was done Newdegate went further:  with the new husband and wife teaching team of John and Sarah Clarke occupying part of the second storey, Newdegate converted the old Schoolmistress’s House to an Infant school, enlarging it the same time. This produced a substantial building that could accommodate 75 youngsters for free education. It was opened in 1848.   After the Education Act of 1870 Newdegate was keen to keep his schools as independent as possible. He saw the new locally organised Board Schools, now being set up all over the country, as too expensive and insufficiently religious. Coton continued to maintain its Church of England status to the end. In 1874 a new section was added to the girls’ school building with separate accommodation for a schoolmistress. There would also be small enclosed play areas for boys and girls at the front of the building, increasingly expected in schools. A partitioning of the schoolrooms would enable more flexible teaching of larger numbers. However, the principle of a large schoolroom at the heart of the teaching still prevailed. The two large schoolrooms for boys and girls still dominate the shape of the building today.  1893 saw the final  improvements to the building. There were new drains, fireplaces, chimney stacks and windows. ‘Best quality local stone’ was to be used. In the boys’ school new classrooms were created including turning part of the schoolmaster’s house into a classroom, illustrating the pressure on space.

More and more boys and girls now attended, often more regularly and frequently for longer. By the early 20th Century there was a wider and more advanced curriculum, fitter pupils, a larger staff and dedicated Headteachers such as George Mosedale (Boys’Head 1887 -1929) and Florence Towe  (Girls’Head 1911-32) Between 1880 and 1902 the role –and financing – of the Newdegates gradually declined and the local authority now took over the main, if not sole role, in the running of the school.

The quality of teaching steadily improved but as numbers continued to increase the buildings were barely adequate, cold in winter and often only moderately equipped. What the school lacked in material benefits it made up for in a feeling of togetherness. With the growth of other and better equipped schools Coton struggled to keep up.   In 1932 the Boys’ and Girls’ sections combined into one school, and instead of staying on until 13 or 14 all pupils would now leave at eleven for a Secondary education their parents and grandparents had rarely enjoyed. The building of the Hill Top estate in the early 1930s kept up numbers for a time but its future became questionable, especially after the war damage from the bomb that destroyed Coton Parish Church, opposite, in 1941.
The school officially closed in 1954 but the buildings were kept open to cope with an overflow of pupils from other institutions. Only in 1973, with comprehensive re-organisation, did it finally cease to take more children and it was then taken over by the local Parks department. For a time the building’s future remained uncertain and in 1987 the Borough Council planned to demolish a now neglected building.

But in 1988, local conservationists led by Beryl Kerby had the vision of turning the historic building into a Heritage Centre for the area. After a lot of hard work and lobbying by many local people – including the foundation of the Nuneaton Civic Society –  Beryl’s dream was realised. Over 30 years later the Heritage Centre is thriving. There are several meeting rooms for local groups and a Victorian Schoolroom – a brainchild of Beryl’s –  where local children can engage in hands on history as they discover the nature of nineteenth century education.

The Centre is administered by a group of Trustees who have worked hard with the aid of lottery and other grants to gradually improve the appearance of the building, still owned by the Borough Council but run and financed by local people. More and more local groups are using the Centre and there are regular historical exhibitions. Appropriately these have recently included school memories of local people. A new kitchen to provide a higher standard of refreshments has now opened and there is a working office with volunteers. In the summer of 2011 the Centre obtained a grant for major repairs to the roof of the building to finally eliminate the damp problems inherent in old buildings. In 2011 a new roof was completed.  The building is now warmer, drier and better insulated than at any time in its history.
The centre is open all day Tuesday, and on Thursday mornings.  In keeping with its tradition entry is free. It will take you back in atmosphere to schooling in previous centuries as well as showing what 21st Century volunteering and fund raising can achieve.